Suffering for Others’ Benefit: RAAM 2018

Suffering for Others’ Benefit: RAAM 2018

It’s beyond my scope of understanding, but for some sick reason we mere mortals seem to get some sort of gratification out of watching someone else suffer greatly during insane athletic events. “How can you say that, Tracy?” you may ask with and air of shock and judgement. Please allow me to attempt to answer that.

Perhaps the reason is that we wish we had the gall to tackle some ginormous obstacle that only those who are slightly off their nut will try. Or could it be that we are looking for inspiration to try something huge that we secretly wish we could do, but want to see someone else succeed first? Another option: What if we just need someone to believe in – a human being who is imperfect but has exceptional courage with ample virtuosity?

Whatever the reason for us spectators of others’ greatness is, the bravery and valor one exhibits in the midst of sheer self-inflicted pain and torture does something for us as onlookers. I’m sure a shrink could explain it in greater detail, but let’s move on to this year’s Race Across America biggest hero: Frank Fumich. His story should be told in book form but for your sake and mine, I will have to give the highlights in 650 more words or less, otherwise, you will find something else to do with your time. His short video will also provide enlightenment into his slightly-crazed mind.

I met Frank in RAAM 2015 when I crewed for another racer. Frank stuck out as one unorthodox cyclist with a larger than life personality. As a matter of fact, he’s not even a cyclist, but an extremist. He puts himself through maniacal adventures time after time. While he didn’t finish all 3000+ miles of RAAM in 2015, he rode every single mile this time. He had exactly 12 days (288 hours) to pedal eastward from Oceanside, CA to Annapolis, MD. It took him slightly longer than that, so according to RAAM rules, he got a DNF. Those three letters are something no athlete wants to ever see beside their name, but for Frank they don’t mean “Did Not Finish”. They mean “DID NOT FAIL.”

Here is a link to his crossing the Finish Line at the City Docks of Annapolis yesterday evening. You will get a glimpse of his gregarious personality and kindness to others, despite being absolutely exhausted.

His Facebook following swelled by thousands of supporters who cheered him along the arduous route that was littered with exhaustion, pain, the verge of mental breakdowns, extreme weather conditions, a tornado, monsoonal rain, wind and excessive heat. What kept driving him relentlessly forward was his virtuous motive: to help children with cancer stay in touch with their families and friends via webcams in their hospital rooms. HopeCam is the charity that Frank chose to live out his unfinished business with RAAM. What a beautiful partnership: one’s unsuitable desire to use his athletic gifts to bring hope and help to others. Kind of sounds like LIVE IT, doesn’t it?

While the fastest racer finished days before Frank, he comes out as the clear winner in the hearts of thousands of others who have followed his journey. His goal was to raise $30,000 for HopeCam, but I’m thrilled to report that he has more than doubled that with $66,000 collected to date. If you would like to show your appreciation for his big, beautiful heart and dedication to living for others, please click here.

His slogan of “It’s gonna get ugly, but it’s gonna get DONE!” rang true. His top notch crew saw him through a safe passage across 3,062 miles in 12 days with just about 2 hours a day off the bike. At the Finish Line, a prayer of gratitude was offered. Well done, Frank. Keep on living it and inspiring others to do the same. 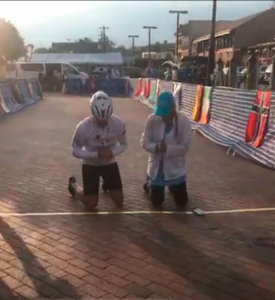