Ready or not – here it comes. More than 6,500 home sites will be developed in Minneola and it will be starting soon with new roads that will allow for the infrastructure to be laid out first.

I became involved in this issue at the request of the residents on the top of Sugarloaf, as they know this new growth will certainly affect us. And it will. Greatly. In reality, we should be thankful that it has taken this long to occur, as the first deal was cut back in the 1990’s. It feels pretty inevitable that it will go forward at this time, but it will take time. Lots of time. 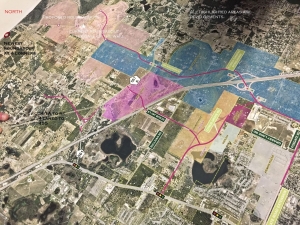 This is an overview of the proposed developments, road changes (in hot pink), roundabouts (pink dots) and a few other notes added to the photo so that you can see what we were shown. By the way, I did not see one other cyclist at the meeting. None that I recognized anyway; most attenders were Sugarloaf Mtn. residents. I was quite surprised that no one else came out, but very glad that I did.  I learned a lot about this project, the planning that has gone into it, the considerations that are being made on the behalf of the cycling community and even some forward-thinking to add bike lanes, trails and paths so that the thousands and thousands of residents living in this area will have a trail system to get from place to place within the developments. However, I still have great concern about how this will change the beautiful, scenic and somewhat sacred roads that we enjoy riding on so much. I am even more concerned with how we will be able to share the roads with motorists in such a congested area. That will certainly take some give and take (and following the laws) by both parties.

Shannon Hidiago is a South Lake Chamber staff member is involved with Bike / Walk Central Florida and was at the workshop representing the needs of pedestrians and cyclists. She is an excellent spokesperson for our cycling community at the municipal level. Thank you for your efforts, Shannon.

Per the South Lake chamber and others who have met with him, the developer is amenable to the following:

Per my own notes:

– Sugarloaf Mountain Road will remain passable for cyclists via a bike trail or road closed to motorized vehicles
– Sugarloaf Mountain Road will be resurfaced
– It will have either roundabouts installed at the two 90 degree turns or made into cul de sac with bike trail between them (going by the water treatment plant)
– CR 455 will remain a 2 lane road as it is designated a Florida Scenic Highway; bike lane proposed to be added
– The commercial development area will be on near The Wall and the current roundabout at the base of The Wall
– 561A to be 4-laned and be changed to intersect 561 near the top of the hill going north, near the power lines, with a roundabout
– The Epicenter of Minneola will be the new exit at the Turnpike that will lead traffic to and from these new developments
– Scrub Jay will be straightened out (for the most part – see map)
– Citrus Grove Road will be modified to take traffic from Hwy 27 to Grassy Lake more easily
– The name of the extension from the Turnpike exit will be North Hancock Extension
– This interchange is to be completed by summer of 2017 and will be called the Turnpike Interchange
– The development highlighted in blue is the Hills of Minneola
– The development highlighted in light pink is Richland Communities
– By 2036 this entire area will be built out
– To the west of 561 (Buckhill area) is owned by individuals on at least 5 acre lots; I was told that we don’t have to worry about a mega development coming there (we will see)
– Turnpike to be widened to 8 lanes to handle traffic demands
– Traffic calmers (speed bumps, roundabouts) to be implemented in these developments to keep traffic flowing
– Roundabout installed on 561 (near power lines, crest of the hill prior to Turnpike Road) to push traffic from 27 or 561A. Turnpike Road remains unchanged.

All in all, I do not oppose growth and development but I do have a few questions that have yet to be answered:

1) Where will these future residents come from? Is this type of development substantiated or is it a money grab?
2) Event organizers and promoters will decide whether the routes we have utilized in the past are still viable, safe, scenic roads that we wish to use in future events. Safety of the athletes is premium.
3) Like most of you, if we deem it unsafe, we will ride somewhere else. Our support of the local economy is probably a drop in the bucket of the new revenue that will be brought in with these developments, families, schools and commercial businesses that are coming in to service these huge communities.

Growth similar to this is going to affect the Mount Dora area as the Wekiva Basin is developed. Perhaps the Minneola Project is a dress rehearsal where we can learn and be proactive, rather than reactive, for the safety measures of cyclists in northeastern Lake County.

Let’s all work together for the good of the community and safety for all.